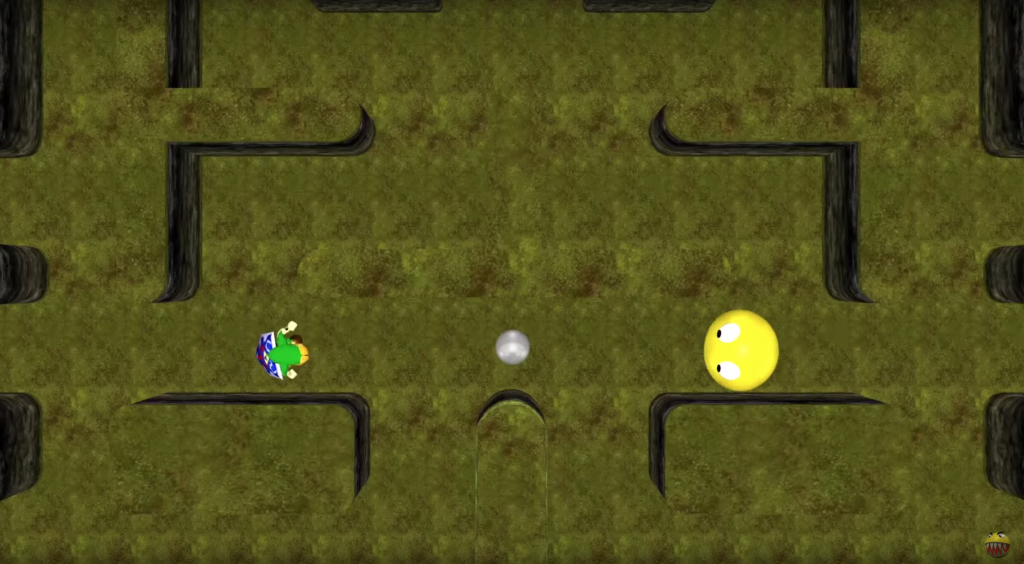 Hey hey hey my fellow gaming lovers! How have you been?!

In today’s article I want to share with you a very cool original 3D animation I produced some time ago featuring my favourite gaming character Pac Man and Link from The Legend of Zelda. The Legend of Zelda, as the name says, it’s a legendary game (pun intended! haha ) that I have been playing for many years now and I am sure many of you will be familiar with it. I bet you are excited to see the video, so what are we waiting for?! Let us dive right in!

Here’s some cool facts about The Legend of Zelda, directly from Wikipedia:

The Legend of Zelda is an action-adventure video game franchise created by Japanese game designers Shigeru Miyamoto and Takashi Tezuka. It is primarily developed and published by Nintendo, although some portable installments and re-releases have been outsourced to Capcom, Vanpool, and Grezzo. The gameplay incorporates action-adventure and elements of action RPG games.

The series centers on Link, the elf-like player character and chief protagonist. Link is often given the task of rescuing Princess Zelda and the kingdom of Hyrule from Ganon, an evil warlord turned demon who is the principal antagonist of the series; however, other settings and antagonists have appeared in several games. The plots commonly involve the Triforce, a relic representing the virtues of Courage, Wisdom and Power that together are omnipotent. The protagonist in each game is usually not the same incarnation of Link, but a few exceptions exist.

Since the original Legend of Zelda was released in 1986, the series has expanded to include 19 entries on all of Nintendo’s major game consoles, as well as a number of spin-offs. An American animated TV series based on the games aired in 1989 and individual manga adaptations commissioned by Nintendo have been produced in Japan since 1997. The Legend of Zelda is one of Nintendo’s most prominent and successful franchises; many of its entries are considered to be among the greatest video games of all time.

The Legend of Zelda games feature a mixture of puzzles, action, adventure/battle gameplay, and exploration. These elements have remained constant throughout the series, but with refinements and additions featured in each new game. Later games in the series also include stealth gameplay, where the player must avoid enemies while proceeding through a level, as well as racing elements. Although the games can be beaten with a minimal amount of exploration and side quests, the player is frequently rewarded with helpful items or increased abilities for solving puzzles or exploring hidden areas. Some items are consistent and appear many times throughout the series (such as bombs and bomb flowers, which can be used both as weapons and to open blocked or hidden doorways; boomerangs, which can kill or paralyze enemies; keys for locked doors; magic swords, shields, and bows and arrows), while others are unique to a single game. Though the games contain many role-playing elements (Zelda II: The Adventure of Link is the only one to include an experience system), they emphasize straightforward hack and slash-style combat over the strategic, turn-based or active time combat of series like Final Fantasy. The game’s role-playing elements, however, have led to much debate over whether or not the Zelda games should be classified as action role-playing games, a genre on which the series has had a strong influence.

Every game in the main Zelda series has consisted of three principal areas: an overworld in which movement is multidirectional, allowing the player some degree of freedom of action; areas of interaction with other characters (merely caves or hidden rooms in the first game, but expanding to entire towns and cities in subsequent games) in which the player gains special items or advice; and dungeons, areas of labyrinthine layout, usually underground, comprising a wide range of difficult enemies, bosses, and items. Each dungeon usually has one major item inside, which is usually essential for solving many of the puzzles within that dungeon and often plays a crucial role in defeating that dungeon’s boss, as well as progressing through the game. In nearly every Zelda game, navigating a dungeon is aided by locating a map, which reveals its layout, and a magic compass, which reveals the location of significant and smaller items such as keys and equipment. In later games, the dungeon includes a special “big key” that will unlock the door to battle the dungeon’s boss enemy and open the item chest.

In most Zelda games, the player’s life meter is represented as a line of hearts. The life meter is replenished a number of different ways, including picking up hearts left by defeated enemies or destroyed objects, fairies or springs located in specific locations, or consuming items such as potions or food. Fairies can be kept in bottles and act as extra lives, reviving the player if they run out of hearts. Players are able to extend their life meter by finding heart-shaped crystals called “Heart Containers”. Full heart containers are usually received at the end of dungeons and dropped by the dungeon boss. Smaller “Pieces of Heart” are awarded for completing certain side quests or found hidden around the game world in various places, and require a certain number (usually four) to form a full heart container.

The games pioneered a number of features that were to become industry standards. The original Legend of Zelda was the first console game with a save function that enabled players to stop playing and then resume later. The Legend of Zelda: Ocarina of Time introduced a targeting system that simplified 3D combat.

I hope you enjoyed this article about my original 3D animation featuring Pac Man vs The Legend of Zelda . If you did, please let me know in the comment section below and share it with a fellow gamer! It would mean the world to me!