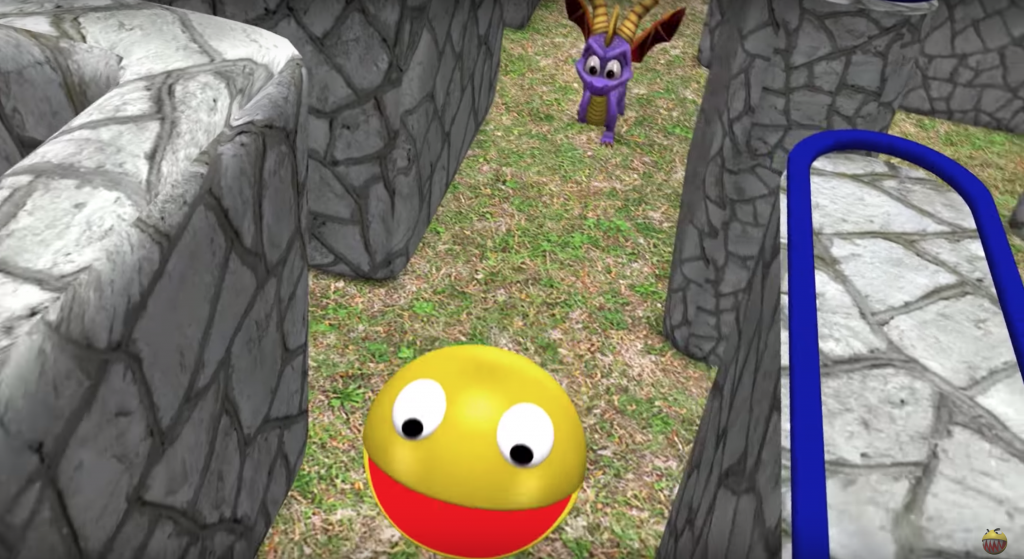 Hey hey hey my fellow gaming lovers! How have you been?!

In today’s article I want to share with you a very cool original 3D animation I produced some time ago featuring my favourite gaming character Pac Man and the mighty Spyro The Dragon. Spyro has been one of the first games I enjoyed playing on the Play Station 1, along with Ray Man and a few others, so it was an amazing time developing this incredible animation! I be you are excited to see it, so what are we waiting for?! Let us dive right in!

Here’s some cool facts about Spyro The Dragon, directly from Wikipedia:

Spyro the Dragon is a platform game developed by Insomniac Games and published by Sony Computer Entertainment for the PlayStation on September 10, 1998. The first game in the Spyro series, it stars the title character, a young purple dragon named Spyro, and his dragonfly friend, Sparx, who must journey across the Dragon Kingdom in order to defeat Gnasty Gnorc, who has overtaken the 5 dragon Homeworlds by trapping the other dragons in crystal and turning their hoard of gems into an army of minions for his bidding. Spyro the Dragon is an open-ended 3D platformer, featuring large, sprawling levels in which the player must locate collectable items, among which are gemstones, crystallized dragons, and stolen dragon eggs. Spyro’s abilities as a dragon include fire breath, a head-on charging attack, and a mid-air glide which he can use to scale large distances, all of which must be used strategically in order to find items and defeat enemies.

Spyro the Dragon started development following the release of Insomniac’s debut game, Disruptor, which sold poorly but was generally praised by critics, impressing Universal Interactive enough to encourage them to make a second game. Artist Craig Stitt suggested a game about a dragon, and work began on a new game. Taking inspiration from the film Dragonheart, the game started out as a more mature title with a dark and realistic approach, but the direction was shifted to have a more whimsical and light-hearted tone in order to appeal to a wider market of consumers. The game was one of the first on the PlayStation to utilize shifting levels of detail among rendered objects, thanks to a panoramic engine developed by Alex Hastings which allowed the game’s open-ended nature to be fully realized. Stewart Copeland, the former drummer for The Police, composed the game’s music, and the titular character was voice acted by Carlos Alazraqui, alongside additional voices done by Clancy Brown, Michael Gough and Jamie Alcroft.

Spyro the Dragon was released by Sony Computer Entertainment as part of a general effort to reach out to a younger age demographic and compete with the more popular kid’s platform, the Nintendo 64. Although sales were initially sluggish, it found larger success following the advent of the 1998 holiday season, and went on to sell nearly 5 million copies worldwide. Critics praised the game’s graphics and gameplay, while some noted its low difficulty level. The game established Spyro as a well-known platforming mascot on the PlayStation alongside Crash Bandicoot, and two sequels, titled Spyro 2: Ripto’s Rage! and Spyro: Year of the Dragon, were later released for the PlayStation in 1999 and 2000, respectively. Although Insomniac gave up the development rights to the Spyro series following the third game, the success of the PlayStation titles lent itself to a continued series of games across various platforms. The game, alongside its two successors, was later remastered as part of Spyro Reignited Trilogy in 2018.

I hope you enjoyed this article about my original 3D animation featuring Pac Man vs Spyro The Dragon . If you did, please let me know in the comment section below and share it with a fellow gamer! It would mean the world to me!