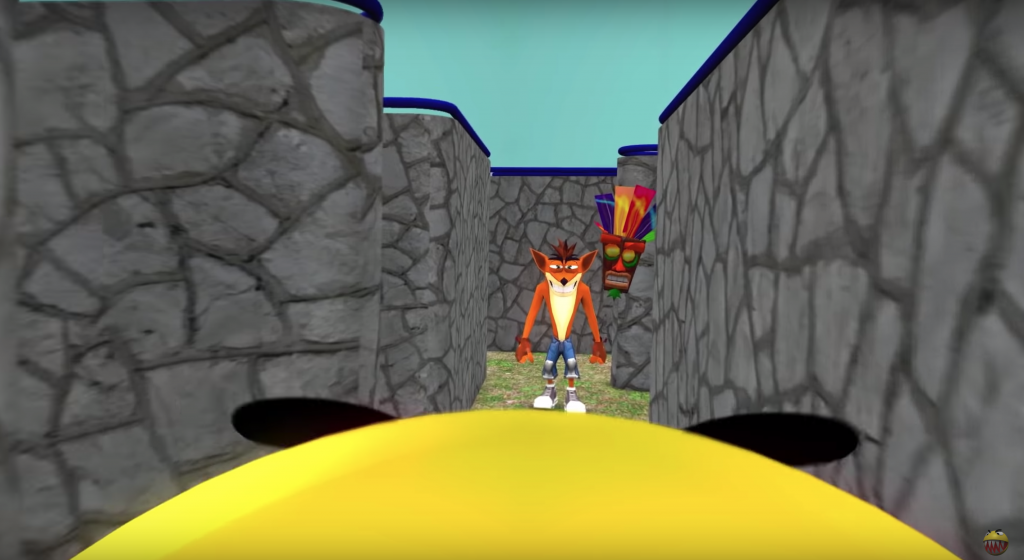 Hey hey hey my fellow gaming lovers! How have you been?! I am loving this amazing 2020, full of cool gaming news and events! A lot is happening in the gaming industry, especially with VR and AR.. I think we are going to see a lot of changes in the way we use gaming, which is extremely exciting!

In today’s article I want to share with you a very cool original 3D animation I produced some time ago featuring my favourite gaming character Pac Man and the legendary Crash Bandicoot. When I first saw this weird orange running animal I was struck as a kid, I loved the idea of running around and jumping over explosives! Crash is a legend of gaming and will always be!! I bet you are excited to see it, so what are we waiting for?! Let us dive right in!

Here’s some cool facts about Crash Bandicoot, directly from Wikipedia:

Crash Bandicoot is a franchise of platform video games. The series was created by Andy Gavin and Jason Rubin during their tenure at Naughty Dog for Universal Interactive Studios and was originally published by Sony Computer Entertainment; which the series was exclusive for Sony’s PlayStation console. The series has appeared on multiple platforms and gone through various developers and spans numerous genres.

The games are mostly set on the fictitious Wumpa Islands, an archipelago situated to the south of Australia where humans and mutant animals co-exist, although other locations are common. The main games in the series are largely platformers, but several are spin-offs in different genres. The protagonist of the series is a genetically enhanced bandicoot named Crash, whose quiet life on the Wumpa Islands is often interrupted by the games’ main antagonist, Doctor Neo Cortex, who created Crash and wants him dead as he is a failed experiment. In most games, Crash must defeat Cortex and foil his plans for world domination, but there have been instances when they have worked together.

On February 12, 2019, Activision announced in a press release for its “4th quarter and 2018 Financial Results”, that N. Sane Trilogy has sold-in over 10 million units since its initial release in 2017.

The Crash Bandicoot series is one of the few Western video game series to find blockbuster success in Japan. Cortex Strikes Back and Warped sold 1.3 and 1.4 million units in the country respectively, while the PlayStation 2 version of Wrath of Cortex sold 212 thousand units.

I hope you enjoyed this article about my original 3D animation featuring Pac Man vs Crash Bandicoot . If you did, please let me know in the comment section below and share it with a fellow gamer! It would mean the world to me!